How many times have I read other bloggers who say thusly: I've been eating, cooking, taking photographs like mad--but, sorry, no time to post! I hate this as a reader. Just give me a hint, I think. Stew? Curry? lots of dessert?
But now I have to say it myself--lots of stuff I could have posted about, but the truth is I've been working hard on my novel, and blogging has suffered. And now I'm going away for the weekend. Is there no end to my perfidy? 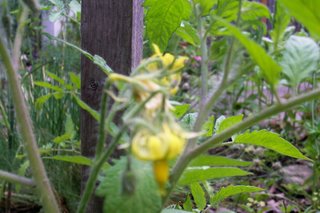 In the meantime, here's something I posted on the Eat Local Challenge site, plus a photo of the flowers on my tomato plants, and one of the garlic scapes that I couldn't for some reason put up on the ELC. 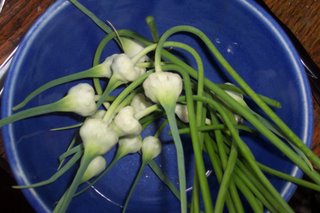 Is that not one of the loveliest words in English? meaning summer, meaning sun, meaning long days, roses, the smell of mown grass.
I'm a fan of June, and not just because I have the summers off (although that's no small thing). May was the month of eating locally, which was interesting, sometimes difficult, educational, occasionally thrilling (ramps!). This year, June is the month of eating and not cooking--D has offered to do most of the cooking so I can work more intensely on finishing a big project. Toward that end, he's unearthed our wok and started cooking up various stir-frys.
Meanwhile, I make my own lunches (unless they're leftover stirfrys, of course), and they are pretty basic: cheese sandwich, cheese and crackers, yogurt with some fruit--the kinds of meals that are assembled rather than cooked, and that can, if necessary, be eaten in front of the computer.
Occasionally, however, the thrown-together lunch approaches greatness: leftover mashed potatoes, a drizzle of olive oil, a splash of milk, some sea salt, and--because it's June--some herbs picked at random in the garden and snipped into the bowl--basil, fennel, and dill.
Posted by mary grimm at 3:43 PM 1 comment: Links to this post 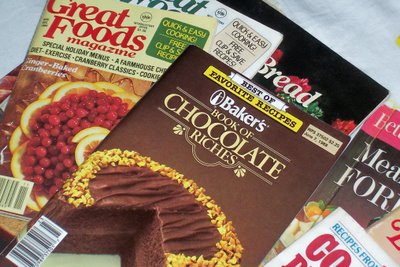 Sweetnick's has a round-up of inside-of-fridge photos, here--both informative and entertaining. All of these refrigerators are a lot cleaner than mine, and they look better organized, too. I'm not showing mine off, but here is part of the bounty from my son-in-law's recent day-long yardsaling: a vintage cookbook bonanza.
Posted by mary grimm at 9:34 AM No comments: Links to this post

This is a recipe I made for a weekend away with some friends (at a condo on an island in Lake Erie: idyllic). It's a mainly local recipe, made in the first flush of eating-local-challenge madness; I remember I apologized because several things (garlic, spices, cheeses) weren't local, to the puzzlement of the friends, whom I hadn't yet tried to convert.
I got the idea for a nonsweet bread pudding from Stephencooks--his recipe (which looked divine) was a Roasted Tomato Bread Pudding. And then when I was looking for things to make for the weekend away, I came across another savory pudding in a Deborah Madison cookbook I love--Local Flavors: Cooking and Eating from America's Farmer's Markets.
It was very well received by the friends, and so here is my version of Deborah Madison's bread pudding, adjusted somewhat to my taste and to what was available.

Asparagus and Wild Mushroom Bread Pudding
1 1-pound loaf of good white bread
2 to 3 cups milk
1 pound asparagus
2 tbs olive oil
1 onion, chopped
2 cloves garlic, chopped
1/2 to 1 pound mushrooms (I used crimini that I got at the market, not wild)
1/3 cup chopped greens or herbs (I used some dandelion greens out of my yard; DM recommended parsley; basil would probably be good, too)
4 large eggs
1 tbs dried tarragon
1/2 tsp nutmeg
2 cups grated cheese (DM says Fontina or Gruyere; I used a mix of French feta, mozzarella, a bit of Swiss and some Parmesan--what I had left in the fridge)

Pull or cut the bread into bite-size pieces. If it isn't stale, put it in a 250 degree oven for abt half an hour, until it's crispish, but not hard. Then pour the milk over it in a bowl and let it sit.
Saute the garlic and onion in the olive oil. Add mushrooms and greens and let it go a little longer. Break the tough ends of the asparagus and cut it into about 1-2 inch lenghths. Boil some water and throw the asparagus in for abt a minute--take out and run cold water over it.
Beat the eggs, and add the tarragon and nutmeg to them. Mix the bread/milk mixture with the eggs, onion-mushroom mixture, asparagus, and the grated cheese, put in a casserole dish and pop it into the oven. Bake at 350 for abt 45 minutes. It's done when there's no liquid slopping around when you tilt the dish.

It was really good--subtly cheesy and savory, with the earthy mushrooms and bright,vegetal asparagus tastes coming together. I plan to make it again, substituting various things around--broccoli for asparagus, different cheeses, adding maybe sundried tomatoes, etc. It was even better as leftovers--some of us had it for breakfast the next day.
Posted by mary grimm at 5:04 PM 3 comments: Links to this post 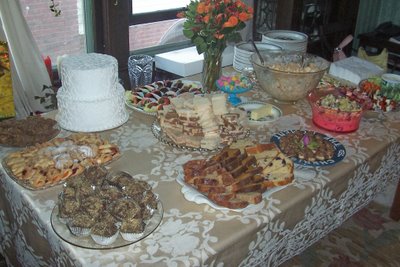 Or more accurately, bridal shower food. The big food event for the end of May was my niece K's shower. It was the usual kind of many-dish extravaganza that our family does. Our one rule is that there must be too much food. And then the hostess must be appalled at how much food is left, and beg/persuade/threaten the guests to take some home with them.
We had, in no particular order--
Chicken salad
Fruit salad
Stuffed mushrooms
Sausage/cheese crostini
Chocolate-dipped strawberries
Kolachke
Chocolate chip blondies
Tiny crustless sandwiches
These wonderful cakes my aunt makes with the icing soaked in
Stuffed celery
Skewered pepperoni and mozzarella cubes
Mints
And a beautiful wedding-like cake

There were supposed to be rolls, but we forgot to put them until the last moment, and then decided not to because there was so much (!) food.
Posted by mary grimm at 6:37 PM 3 comments: Links to this post