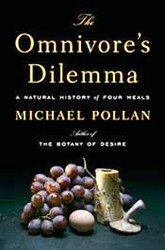 Fact from Michael Pollan's book The Omnivore's Dilemma: A Natural History of 4 Meals: a single strawberry contains about five calories. To get that strawberry from a field in California requires 435 calories of energy.
The book is full of such interesting bits of information--also some disgusting ones (don't ask about fecal dust in cattle feedlots--or rather, do, if you are interested in what goes into your food). I'm reading it along with eating locally this month, and it's eye-opening.
He follows the food chain back to its sources--a corn field in Iowa, a feedlot in Kansas, farms that practice Big Organic (Earthbound Farms, for instance, from whom you have probably bought lettuce) and Small Organic (family-type, sustainable farms). In the last section, he forages and hunts his dinner--I haven't gotten that far. I'm just past the feedlots (fecal dust!), starting on his dinner from Whole Foods.
Here's an excerpt. If you're interested in this kind of thing, it's required reading. His earlier book, The Botany of Desire, which focuses on 4 particular plants

(potatoes, apples, tulips, and marijuana) is also very good. (Check out that organic smile, right.)
For more diverse and interesting opinions on the local eating challenge, check out the ELC website.
Posted by mary grimm at 8:33 PM No comments: Links to this post 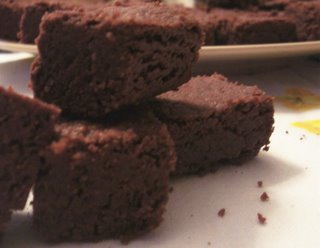 This is a post that meanders from eating local, because I wanted to do The Spice is Right II, hosted by Barbara at Tigers and Strawberries, and I got fixated on the idea of a sweet shortbread cookie that used a savory spice. Pretty much nothing in this shortbread is local, although the spices are old friends, and have lived at my house for a fair amount of time.
My chosen spice is chile. In the food culture of my childhood, which I would characterize as '50s cooking (meatloaf, angelfood cake, jello with various things in it) along with a sprinkling of Slovak dishes like stuffed cabbage and kolachke, chili powder was something used exclusively for chili--my mother made a distinctly unhot but flavorful version with 2 colors of kidney beans. Chili powder came in only one variety, and was seen as somewhat exotic.
As an adult, I became enamored of all things hot and spicy, and I have come to love the varieties of chile--pasilla, ancho, chipotle--my refrigerator is cluttered with little tubs from the spice stand at the market. I chose my all-around favorite, chipotle, to highlight my chocolate shortbread.
It didn't turn out quite right--I have to admit that, although I feel like my mother when I say it. She was always turning compliments away with a recital of what had gone wrong with a dish--"I forgot the butter until the last minute," or "I didn't beat it long enough--it should have been higher"--that kind of thing, although no one else could tell that anything was wrong. But although the shortbread is really good, I think it's a little too short, meaning proportionally too much butter (and why is this short? does it have to do with shortening? why is shortening called shortening? things to ponder). They look a lot like brownies, but are unlike them in texture--they have the sandiness of shortbread, although they're a little too crumbly.
The recipe is a little muddy (I put it together from 2 other recipes, one from Joy of Cooking and one from Martha Stewart), and although I'm including it, it's with a disclaimer--I'd change it the next time I made them. But I will make them next time, because apart from their too-shortness and their tendency to crumble, they were heavenly in taste, very chocolatey and spicy and buttery.
Chocolate Chipotle Shortbread
2 sticks butter
about a cup of sugar (used half granulated and half confectioner's)
1/2 cup cocoa
2 squares unsweetened chocolate, melted
generous pinch of salt
1/4 cup cornstarch
1 and 1/2 cups flour
1 tsp chipotle powder (use less if you're not a big fan of heat)
a pinch ginger
1/4 tsp dried rosemary, crushed to a powder
Cream the butter, then add the sugar and cream that into the butter. Add cocoa and salt, stir to combine, then add the melted chocolate. At this point I tasted it to see if it seemed sweet enough--the cup of sugar measurement is an approximation, because I didn't want it to be too sweet, so I added it until it seemed OK.
Mix cornstarch, flour, and the spices and rosemary. Mix into butter/chocolate mixture.
Pat into an ungreased square pan (I used an 8 by 8, but 9 by 9 would probably have been better, since they came out a little thick). Bake at 325 for about 35 minutes. Use a toothpick to see if the shortbread is done--it should come out cleanish, but with perhaps a crumb on it--nothing sticky.
The shortbread is supposed to be cut while warm--and it looks quite floppy and soft when you do it. But it firmed up enough to be respectably cooky-like.
As I said, the flavor is intensely chocolatey, with a nice bite of pepper, backed up by the ginger. The rosemary could probably be left out, but I liked its piney-ness with the chocolate. When you bite in, it has a cookie feel in your mouth, and the shortbread sandy crumb, but it melts to a mouthful of spicy smooth chocolate--very nice.
Posted by mary grimm at 7:24 PM 6 comments: Links to this post

Today I went to the Mustard Seed Market, a great local chain (2 stores) with an emphasis on organic and healthy food. I love it there--I sometimes feel as if I get healthier just by walking in the door. I went today looking for local products, and although I came away with some good buys, I was surprised to find that local stuff was the exception, not the rule. (Check out my post on the Eat Local Challenge blog for more on the shopping trip.)
But I did buy some great Amish chicken and asparagus, both local, and these were the basis of dinner. Full disclosure: I didn't cook. D did, a nonrecipe type of cooking. He cut up the chicken 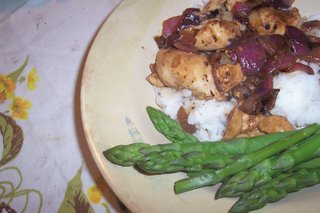 breast (just one, because it was so big), sauteed it with some red onions (nonlocal!), added a couple of tablespoons of flour to coat the chicken pieces a little, then splashed in some red wine and put the lid on for a while to cook it through. Final additions, a bit of vinegar and a bit of honey--sour and sweet to balance the flavors.
We had it over rice (nonlocal, one of my exemptions) and the asparagus, steamed until it was bright green and tender. Not only very tasty, but it made the house smell great. Shouldn't there be food perfumes? Eau de beef stew? Tomato parfum?)
Posted by mary grimm at 7:29 PM 8 comments: Links to this post

breakfast is the cruelest meal 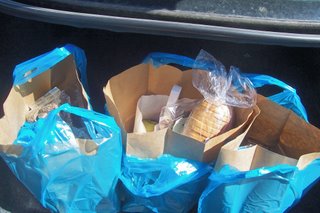 That is, if you're trying to eat local. Eating local takes thought, care, consideration, perhaps some prep time, unless you've found a local cereal, which I haven't. I'm not a morning person, and to have to think about breakfast has been deeply upsetting to the walking coma where I like to spend the morning hours.
Toast (local bakery) and egg (from Amish farm) are fine; orange juice is fine (one of my exceptions). But cereal, no. And yogurt with fruit, another no. I haven't found a local yogurt, and although I thought I'd like to try making my own, I haven't done it yet.
On the bright side, I went on a shopping trip to three local stores yesterday, and got a plethora of local items. At one, Nature's Bin, I expected to do well, because it's a store with a commitment to local and organic food--I got apples, salsa, hummus, bread, and a number of other things--

almost everything in my cart except for the chocolate (Dagoba and Lindt) was the localest of local.
The 2nd place, the Sausage Shoppe, also has great local credentials--they smoke and prepare their own sausage, kielbasi, and other meat products--their smokehouse is out back, I believe, a grandfathered-in holdover in this urban neighborhood. Here I got leberwurst, kielbasi, and horseradish: local, local, local.
But the third place surprised me: Giant Eagle. True, I bought a number of nonlocal things, including the orange juice. But I found some local black walnuts, and an Ohio wine from Grand River (only about 40 minutes away).
D is not used to seeing me so excited when I come home from grocery shopping--but maybe he'll have to get used to it.
Posted by mary grimm at 5:23 PM 5 comments: Links to this post 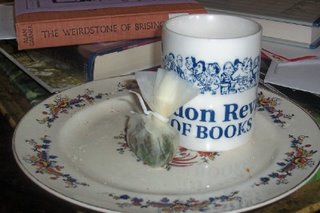 Pleased to report that I have one local meal under my belt. I know that I'm not going to be able to eat totally locally (and don't even want to: the chocolate factor), but I took pleasure in looking at my plate and saying, "You belong to my foodshed." Saying mentally, you understand.
I had rye bread (baker at the farmers market) toasted, with butter from the Hartzler Family Dairy (Wooster, Ohio), and a scoop of cottage cheese from the Amish guy in the straw hat at the farmers market.
I always have tea with breakfast, and I'd decided that I'd be drinking mint tea, dried from my garden mint, for the duration. But I couldn't find my tea ball. I ransacked the kitchen as quietly as I could (D still sleeping), but no tea ball. My intense desire to avoid drinking a cup of hot water led me to MacGyver-like inspiration--I made an impromptu tea bag with a coffee filter and a twisty-tie.
Thanks to Richard Dean Anderson, local eating is saved.
Check out the Eat Local Challenge group blog for more measured and informative prose on the subject.
Posted by mary grimm at 9:29 AM 3 comments: Links to this post