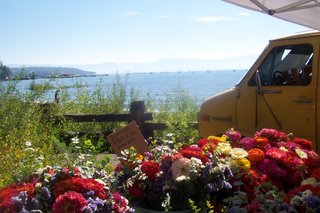 Lake Tahoe was great in a number of ways, about which I'll say more over several posts. But one of the most amazing things was the Tahoe City Farmers Market (Thursdays, 8 am to 1 pm, in case you're in the neighborhood). First, it was on the lake--points right there for the blue and sparkling view.
But even without the clear Tahoe water (from snowmelt) sparkling between the stalls, there would have been

so much else to look at, taste, sniff--and, of course, buy. A rainbow of plums, for instance. A dozen varieties of tomatoes, heirloom and conventional. Breads, Indian food, giant blackberries, velvety peaches. An avalanche of beans.

My sister kept asking me if I'd taken a picture of this or that (I had), and I kept saying, have you tasted this? the cilantro pesto? the organic strawberries?

We bought (a partial list) mint chutney, chicken tikka, strawberries, blackberries, red plums, black plums, maroon plums, lemon cucumbers, basil, a small honeydew melon, a handwoven market basket, goat cheese, manchego cheese, eggplants, several kinds of tomatoes, and much, much more. Then we staggered back to our house on the lake, ready to eat locally for as many days as it took to consume it all.
I love my usual farmers markets--North Union at Crocker Bassett and off Detroit Ave. in Lakewood--but I have never seen anything like this variety and lushness there. I guess this is the difference between living in Ohio and California. They had yellow carrots! And long beans! I'd forgotten about those--something I'd never even seen before (next to the eggplant in the bean picture). 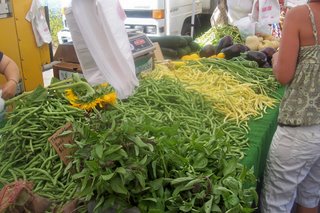 If anything could make me want to move to California, the prospect of this kind of farmers market might do the trick.

Posted by mary grimm at 7:44 PM 4 comments: Links to this post

I'm going away to Lake Tahoe for a week, so maybe I'll get to see what eating locally is like in another location. In the meantime, I wanted to recommend Molly O'Neill's book, Mostly True. Its subtitle is "a memoir of family, food, and baseball"; and when I heard a piece about it on the radio, it sounded like it was mostly about food. O'Neill is a food writer and has been a chef, so I was expecting it to be something like Ruth Reichl's books (which I loved). But although there is food aplenty in here, it's really centered on O'Neill's amazing family--her father, mother, and 5 brothers. Very funny and readable.
Here's a quote to tempt you:
Many families have an inspirational text, a book that both mirrors their hopes and ambitions and acts as a spiritual how-to guide--the Bible, for instance.... Ours was Go, Dog. Go!.... a story about dogs... dogs on bikes and scooters, dogs in the water, in trees, and in cars. ... mostly about boy dogs....
There is one girl in Go, Dog. Go! She is a French poodle and a redhead and she spends all her time trying to get one big goofy-looking hound to notice that she's alive. ... "Do you like my hat?" she asks... "I do not," replies the hound....
In fact, I looked more like a St. Bernard than a poodle, and I had little interest in building hats. But my appetite for recognition was greater than any dogs', and in the spring of my eleventh year, I courted it with a red pogo stick.
I hadn't heard of O'Neill before reading this, but I'm determined to search out whatever else she's written.
Posted by mary grimm at 11:21 AM No comments: Links to this post

What could be more ecologically sound? I was reading cookie crumb's blog this morning, and there was a photo of something that I've been pulling up and throwing on my ineffective compost heap--purslane. It's free, green, and good for you.
"Purslane may be a common plant, but it is uncommonly good for you. It tops the list of plants high in vitamin E and an essential omega-3 fatty acid called alpha-linolenic acid (ALA). Purslane provides six times more vitamin E than spinach and seven times more beta carotene than carrots. It's also rich in vitamin C, magnesium, riboflavin, potassium and phosphorus." (from Seabreeze Organic Farm's website)
I went right out and pulled some up. I washed it and nibbled a bit--a little tart, possibly lemony (as some sources say it is). Not bad. We had some in our salad for dinner, but it was pretty overwhelmed by the lettuce, cucumber, carrot shavings, and vinaigrette with mustard and honey. I think I'll have to look out for some recipes that will give it more of a starring role.
Posted by mary grimm at 9:15 AM 2 comments: Links to this post 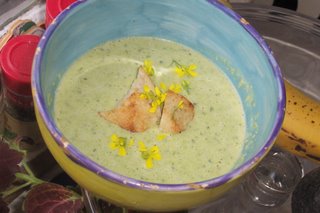 Our second meal was heavenly-delish, but maybe a mite unbalanced. I was brought up with dinners that always included meat (or occasionally fish), potatoes (very rarely replaced by rice or dumplings), two vegetables, and salad. So sometimes when we make guacamole for dinner accompanied only by chips, or a solitary baked potato, I feel as if I ought to be explaining something to my mother.
The slightly unbablanced meal was fresh pea soup, and potatoes fried with onions and chives--my first time with this soup (although I've made split pea a number of times).
I couldn't find a recipe that I felt happy with (or that I had all the ingredients for), so I used one in Joy of Cooking and one in a Martha Stewart book as my foundation and took flight from there. 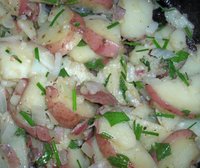 It came out wonderfully--a beautiful color of green, with a very fresh taste. The fried potatoes were basically just potatoes fried with onion and chives (and a little home-grown garlic)--no need for a recipe.

Fresh Pea Soup Garnished with Croutons and Mustard Flowers
1/2 onion, chopped
1 clove garlic, chopped
2 tbs olive oil
2 cups shelled peas
a handful of beet (or other) greens, cut in thin strips
a handful of fresh mint leaves, ditto ***forgot this in 1st draft, sorry)
2 cups chicken broth
1/4 cup white wine
1/2 cup cream
1/4 cup yogurt
pinch of ginger
1/2 tsp ancho chile powder
1/2 tsp paprika
1/4 tsp nutmeg
a few shakes of pepper
salt to taste
croutons and mustard flowers
(or other garnish)
I sauteed the onion and garlic in the olive oil. When they were softened I added the peas, beet greens, broth, and wine, and brought it to a simmer. I'm not sure exactly how long I let it go, because I kept taking one pea out to see if it was done; I'd guess about 4 minutes.
I added the seasonings and the cream and let it go a little longer, 2 more minutes about. (The spices gave just a hint of heat to the soup--but some might like it more purely pea in flavor--if so, I'd use only the salt, pepper, and nutmeg.)
I tried my immersion blender on this mixture, but it didn't work so well, so I put it in the regular blender and gave it a whiz. When it was smoothly and deliciously green, I added the yogurt, and then garnished our bowls with the flowers and croutons. This was meant to be a cold soup, but in fact, I ate it at room temperature (very good), and D ate it warmed up (because he can't see the point of cold soups) and had no complaints.

The mustard flowers are from my garden--I have mustard growing wild, which I more or less like, and I often eat the flowers raw when I'm out in the yard--they're very hot and sharp. They're not too noticeable when you put them in something, so they were just the tiniest

piquant note in the soup, and also very pretty. The croutons were homemade: sourdough bread cut up and heated over a low flame in a cast iron pan to dry them out; then I added a little oil and tossed them around in the pan until they were coated and crispy.
My mother would have liked each element of this meal (although she would have perhaps questioned the mustard flowers), but she would probably have recommended that we add a nice sauteed chicken breast or a stuffed pork chop.

Posted by mary grimm at 8:19 PM 5 comments: Links to this post 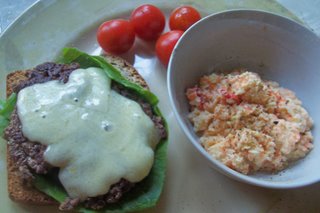 Liz at Pocket Farm cleverly came up with One Local Summer, to keep us eating locally in a non-pressured way: commit to at least one purely local meal a week over the summer. I had to beg off last week (here's the round-up) because I was traveling, but it's week 2, and I'm on it.
My local meal last night was simple and delicious--no thanks to me, because it was a total D production. Lately, he's been obsessed with our wok, but this meal celebrates a return to the good old iron skillet.
He made some deer burgers: meat from last year's hunting season, in SE Ohio, lettuce from his father's garden, local Amish cheese, locally baked bread. The cherry tomatoes are local produce from the Mustard Seed Market, as were the vegetables in the coleslaw.
I actually have lettuce in my own garden, but mine is more in the micro-green stage. D's father claims this is because he waters his every day, and I don't. It's true, I believe in tough vegetable love.
Posted by mary grimm at 9:02 AM 1 comment: Links to this post

Here's a quote that expresses perfectly how I feel about food blogs:

"I think the thing I like most about food weblogs is that they lift recipes and food off the page and into real life, in living color! You take one look at a picture of something cooked by a living person, not some invisible cookbook aggregate, and you say, Hey! I can do that. In fact, I am going to do it right now!

I found it along with a great post on Coconut Bread on mekuno cooking; and just to make it more food-blog-interactive, Karin found the recipe at another of my favorite blogs, bakingsheet.

We had hot dogs for the Fourth, which were ungourmet but perfect. Just to show off I made some cucumber salad, not really a recipe: cucumbers (peeled and seeded) and the kernels from one ear of corn, tossed with a dressing (a few tablespoons of mayo, soy sauce, lime juice, a bit of olive oil, rice vinegar) and a handful of herbs snipped from the garden: dill, fennel, cilantro, and mustard flowers). It was our hot dog antidote, the healthy part of our meal. 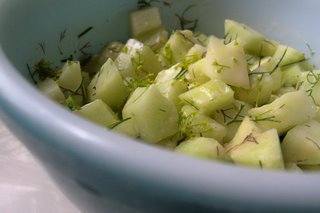 Posted by mary grimm at 5:40 PM 2 comments: Links to this post