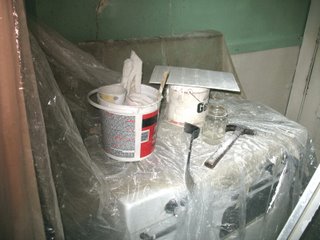 Here's the reason there haven't been so many cooking posts lately--the only things on our stove are a tub of plastering stuff and various implements of renovation, plus an attractive frosting of plaster dust. D is fixing the ancient water damage, that we ignored for as long as we could (some might say it was way too long), and because he's a perfectionist, he's decided that not only will he do his own plastering, but that he'd redo all the ceiling problems, cracks, flaws, dimples, etc. All the books say to leave large plastering jobs to the experts, but D was undeterred. My part is to be encouraging; to call out "What's wrong?" in a calming voice when he starts swearing; and not to complain about the dust.
So there's been some take-out, some McDonald's; I had a Big Mac for the first time since the '80s. We have done a little bit of cooking, but it's short-cut cooking, making extensive use of the microwave. I made scones the other day, 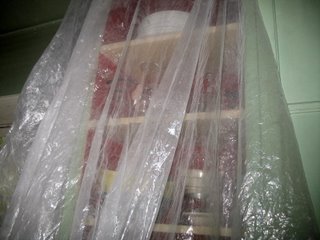 but all the prep work had to be done in the dining room, since every kitchen surface is a plaster-staging area.
The idea is to have it done for Thanksgiving, when my daughters' families are coming. I have my fingers crossed.
Posted by mary grimm at 9:33 AM

I have a Trader Joes chocolate scone for mid morning snack today.

A very carbo diet--which sounds good to me, since I love carbs. Especially carbs with chocolate.

how exciting! :) hopefully everything will be done in time. Got to love the 'handy' men in our lives. ;)

Thank you Lucette for this look at the work in progress. Good luck getting it all finished!

ya wonderful carbos ! bet it is unAsian !

Anyone else is interested in receiving a FREE MC DONALD'S GIFTCARD?